It’s been a busy week in COVID-19’s Central Asia. Here’s a quick summary 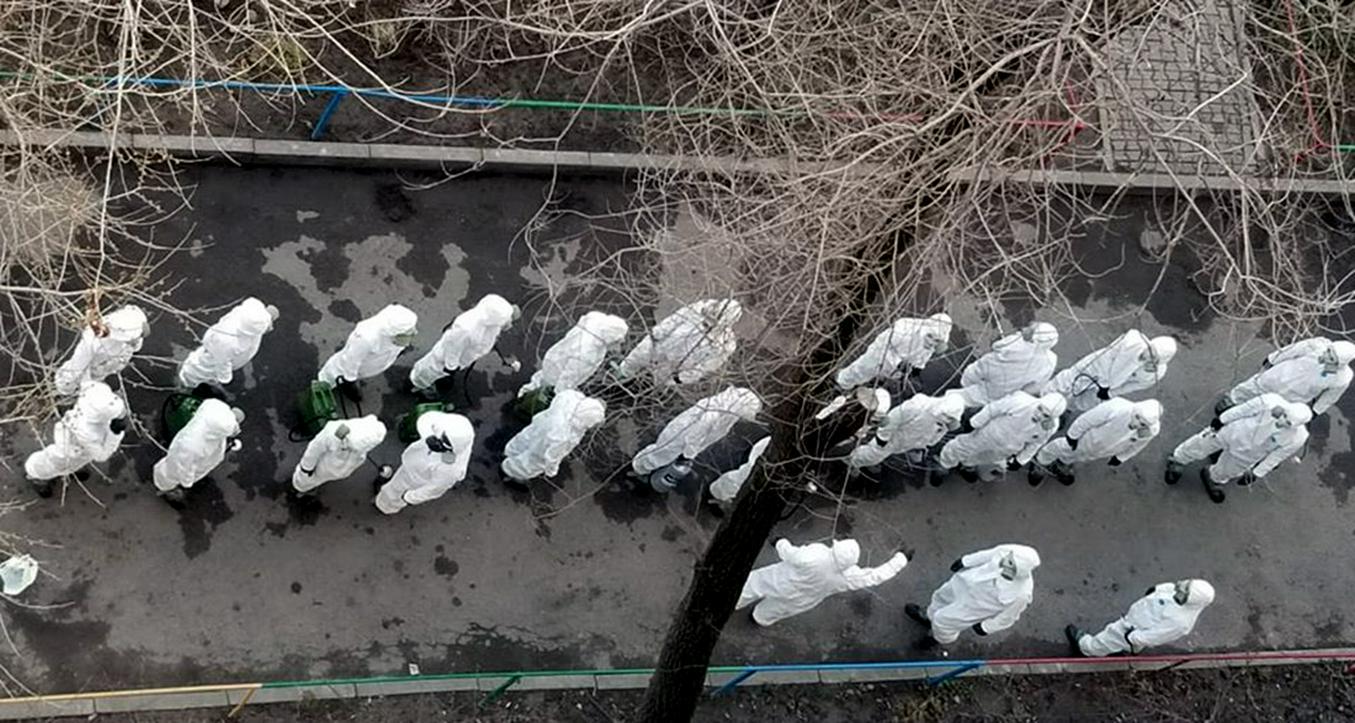 In a courtyard in Almaty. Photo from the Facebook page of Indira Khametchina

The first country in Central Asia to officially report a COVID-19 infection, as of 31 March Kazakhstan has 340 confirmed cases and 2 deaths. The two major cities of Nur-Sultan and Almaty, where the majority of cases have been recorded, are quarantined and under lockdown, with almost all workplaces closed until 5 April. Since 28 March, residents are allowed out of their homes only to buy food and medicine and to go to work. Large public spaces like parks and squares have been closed and gatherings of no more than three people (excluding family members) are permitted. Children are not allowed out on their own. 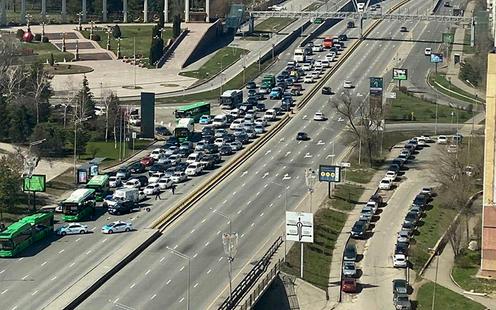 Queues at a police checkpoint in Almaty. Phot from Instagram @kris_p_almaty

Yesterday, footage emerged of a long tailback on a major road in Almaty, with police stopping motorists (and pedestrians) at a number of spots around the city to check if they have the required permit from their place of work. If not, they are being taken in to the local police station and the relevant administrative charges filed against them.

Since yesterday, the towns of Karaganda, Temirtau, Abay, Saran, Shakhtinsk and Aktau will be subject to similar measures as Nur-Sultan and Almaty. Later today (31 March), Shymkent will join them, and from 2 April also Ust-Kamenogorsk and Semey.

Yesterday, the government acknowledged that they have no longer been able to trace the origin of early 40% of infections in the country. Today, the Almaty authorities confirmed cases of community spread.

In Karaganda, the police have reportedly padlocked the entrance to a block of flats after one of the residents who had been in contact with a coronavirus patient (but has not tested positive himself) allegedly broke home quarantine rules. The entrance will be locked for two weeks. Residents have apparently been promised food deliveries and garbage collection.

The interior ministry reported today that over 400 people have been arrested for violating quarantine.

Around two weeks ago, the Kazakh government announced an anti-crisis package including the provision of cheaper credit and tax breaks for businesses and moratoriums on audits. This has recently been expanded to a total of $10 billion. Businesses forced to close due to the coronavirus will be exempted from property taxes and banks will be required to offer struggling entrepreneurs deferment on loan payments until mid-June. $2.25bn is to be invested in an “Employment Roadmap” aimed at creating 250,000 jobs. Kazakhstan is of course battling the dual effects of the coronavirus and the steep drop in oil prices.

Those made unemployed during the crisis are to receive a minimum wage equivalent to $95 a month, which has today been extended to the self-employed and those working informally. Kazakh president Kassym-Jomart Tokayev also announced today that pensions and benefits would be indexed at 10% to protect against inflation.

Kyrgyzstan has currently reported 107 cases of the virus.

In Bishkek, public transport and taxi services have been totally suspended and residents banned from leaving their homes without a written note setting out one of three permitted reasons for being outside – food shopping, going to a pharmacy, or (in cases of urgent need) visiting a medical facility. Those taking pets for a walk may do so no further than 100 metres from their homes. Only employees of a limited number of organisations are permitted to go to work, and they must obtain special permission to do so. A night-time curfew has been introduced in the city, with 137 people arrested last night alone for its violation.

Today, these measures were extended to include a ban on the use of private vehicles except for situations of urgent necessity, and bans on the movement of unaccompanied minors, on gatherings of more than three people, and on visits to friends, family and neighbours.

Lockdowns are also in place in the southern towns of Osh and Jalal-Abad, the Nookat and Kara-Suu districts of Osh region and the Suzak district of Jalal-Abad region. People all over the country are being encouraged to stay at home.

Last week, Kyrgyzstan became the first country in the world to receive IMF assistance for the coronavirus crisis, taking on loans to a total of $121m. Today, the Kyrgyz government finally unveiled its anti-crisis plan for businesses, based on deferred tax and loan payments. Alongside this, a social support plan was announced, focusing largely on food security. The plan also envisaged “targeted social assistance to low-income families in the form of food packets”. No figures were mentioned.

Yesterday, the head of the Kyrgyz Association of Importers and Suppliers, Gulnara Uskenbayeva, complained about the wording of Deputy PM Kubatbek Boronov’s recent call on private enterprises to follow the example of the government and continue paying employees during enforced temporary lay-offs. According to Uskenbayeva, following Boronov’s statement on «enforced absences», employees at workplaces permitted to remain open through the crisis have started to skip work, claiming the right to be paid nevertheless.

The Kyrgyz health ministry has stated that the country currently has 625 ventilators and that the World Bank will help the country to acquire 200 more.

Uzbekistan now has 167 confirmed cases and two deaths. On 27 March, the authorities reported the first case of community spread.

Initially less strict, the measures now in place in Uzbekistan are perhaps even more sweeping than those in Kyrgyzstan and Kazakhstan. The government has told people around the country to leave their homes only to buy food and medication and banned gatherings of more than three people. In addition, all those who leave their homes must wear a medical face mask. Those who do not will be fined 1.1 million Uzbek soms ($117; about double the monthly minimum wage). 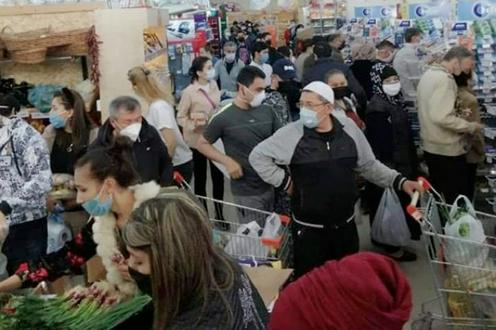 Shoppers at an Uzbek supermarket just before the ban on car travel entered into force. Photo from Facebook.com/zkhashimov

Uzbekistan also went ahead of Bishkek in banning car travel in major towns, to last until 20 April. The introduction of the ban was preceded by chaotic scenes at marketplaces and in supermarkets as people rushed to fill their cars with groceries before it came into effect. A suspicious number of luxury car owners seem to have since applied for permits stating that they are employed as food/medication delivery workers.

Besides Tashkent, the cities of Samarkand, Namangan, Andijan, Guliston, Bukhara, Navoiy and Zarafshan, and the towns of Almalyk and Bekabad in the Tashkent region have also been placed under quarantine, with restrictions on entry and exit and public transport suspended. All transport between regions, apart from goods lorries, has been banned.

Uzbek president Shavkat Mirziyoyev has ordered the purchase of 500 additional ventilators. No information was given (or seems to be available) about existing numbers of the machines in Uzbekistan.

Nearly two weeks ago, Mirziyoyev announced a $1 billion anti-crisis fund to fight the coronavirus epidemic and support businesses and the public. Banks have been asked to allow companies and individuals who have suffered from the current lockdown to defer loan repayments until 1 October. Fines and disconnections for the late payment of utilities bills have also been cancelled, and businesses forced to close due to quarantine measures have been relieved of rent payments. Additional measures were due to be announced today, but President Mirziyoyev has sent the bill back with directions to include concrete provisions for low-income families, people with disabilities and pensioners living alone, as well as to ensure sufficient access to (and price stability for) food and medicine. 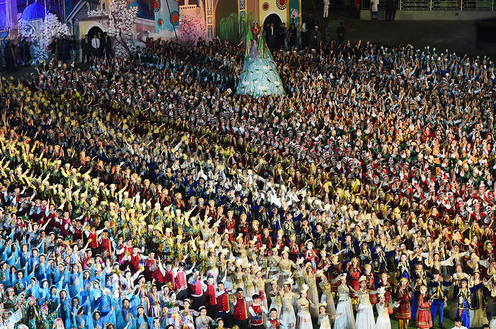 (No social distancing at this year’s Nowruz celebrations in Tajikistan.. Photo from Eurasianet)

Still yet to report any official cases of the coronavirus, life in Tajikistan seems to be continuing more or less as normal, apart from the fact that the country’s borders remain closed and bulk-buying appears to be pushing up prices. Schools are scheduled to re-open as normal after the holidays on 1 April, huge Nowruz celebrations gathering thousands were recently held around the country, and, unlike elsewhere in Central Asia, the spring army draft is to go ahead this year as normal.

Despite the fact that Tajikistan, with its extensive reliance on migrant labour remittances and tourism, may suffer the most from the joint oil-crash-coronavirus crisis even without an epidemic in the country, few economic measures have been announced by the country’s government. As Eurasianet writes, a recent press release on measures to mitigate the impact of external shocks on the country offered very little change from a pre-existing macroeconomic roadmap.

The Tajik health ministry recently complained of insufficient space to house returnees from abroad requiring placement in quarantine. Those in quarantine in Tajikistan have instead posted videos complaining at unsanitary conditions that seem guaranteed to spread the virus. Similar videos have been posted in Kyrgyzstan.

Again, no official cases of COVID-19 have been acknowledged by the Turkmen authorities, despite independent media reports to the contrary.

Borders are closed and interregional travel restricted, as detailed in a previous article. School holidays have been extended for a week. The authorities seem to be making very little mention of COVID-19, and are even reported to have arrested people on the streets in Ashgabat merely for talking about the coronavirus.

RFE/RL writes that prices have sky-rocketed in the country, partly as a result of extreme border closures reducing the flow of goods into the country.